Home / Articles / Learn the Basics of Roof Systems (I) /

Learn the Basics of Roof Systems (I)

Roofs are considered one of the most critical components of your house. From materials and roof shape to problems and repairs, read this comprehensive guide to ensure yours is up to par. 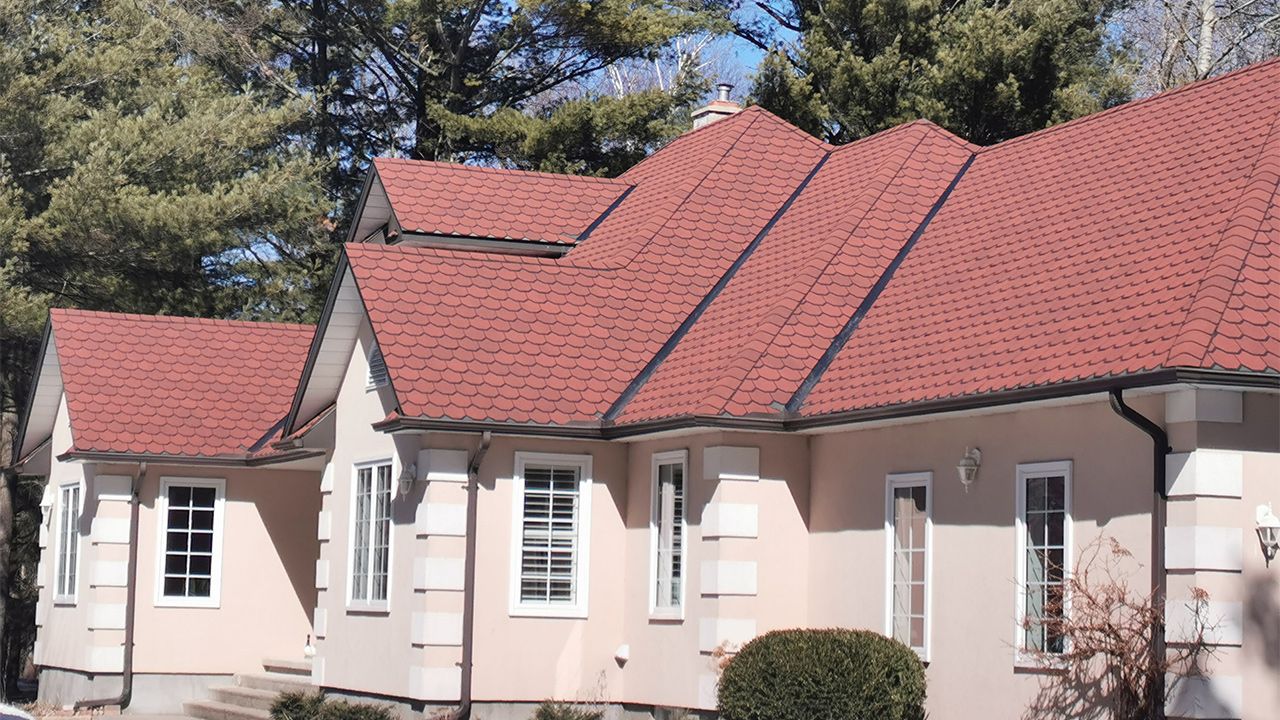 Roofs are considered one of the most critical components of your house. They shed the water that would otherwise cause every other part of your house to fail. As important as roofs are, they rarely see a close inspection, either by building inspectors during construction or by home inspectors prior to a sale. Inspectors generally don’t venture onto roofs but instead look at them from the ground.

That means whoever does the work needs the know-how and the integrity to do the job right. DIY’ing your own roof is tricky. If you get it wrong, you can potentially ruin your house—and that’s not to mention the safety considerations of working on a slope that’s high up in the air.

Know the Anatomy of a Roof

The first way that roofs shed water is their slope. The greater the slope of a roof, the faster water runs off it, and the less time it has in which to find a hole to leak through. All roofs slope. Even flat roofs, their attached decks and gutters have a slight pitch, typically, a 1/4-inch drop every four feet for optimal drainage.

Roof shapes range from flat roofs as the most affordable option, offering space for mechanicals or a rooftop deck to to the most common A-framed gabled roof built in a variety of pitches to best shed water and snow. Coastal homes benefit from the low profiles of the four sided hip roof that resist hurricane winds and lift-off.

Mansard roofs, the other curved hip roof, originated during the Empire period and is the favored design for spooky mansions belonging to the likes of the Munsters and the Adams family. The gambrel roof is recognized for sheltering stacks of hay in the archetypical American barn. Both roofs deliver max headroom for storage or a cathedral height ceiling for additional, luxurious living space.

The peak of a roof is called a ridge, the bottom is the eave, and sloping edges are called rakes. Where two roof planes meet at an inside corner is a valley, while at an outside corner the intersection is a hip. Underlying all these roofs will be the frame, which consists either of rafters or of trusses. 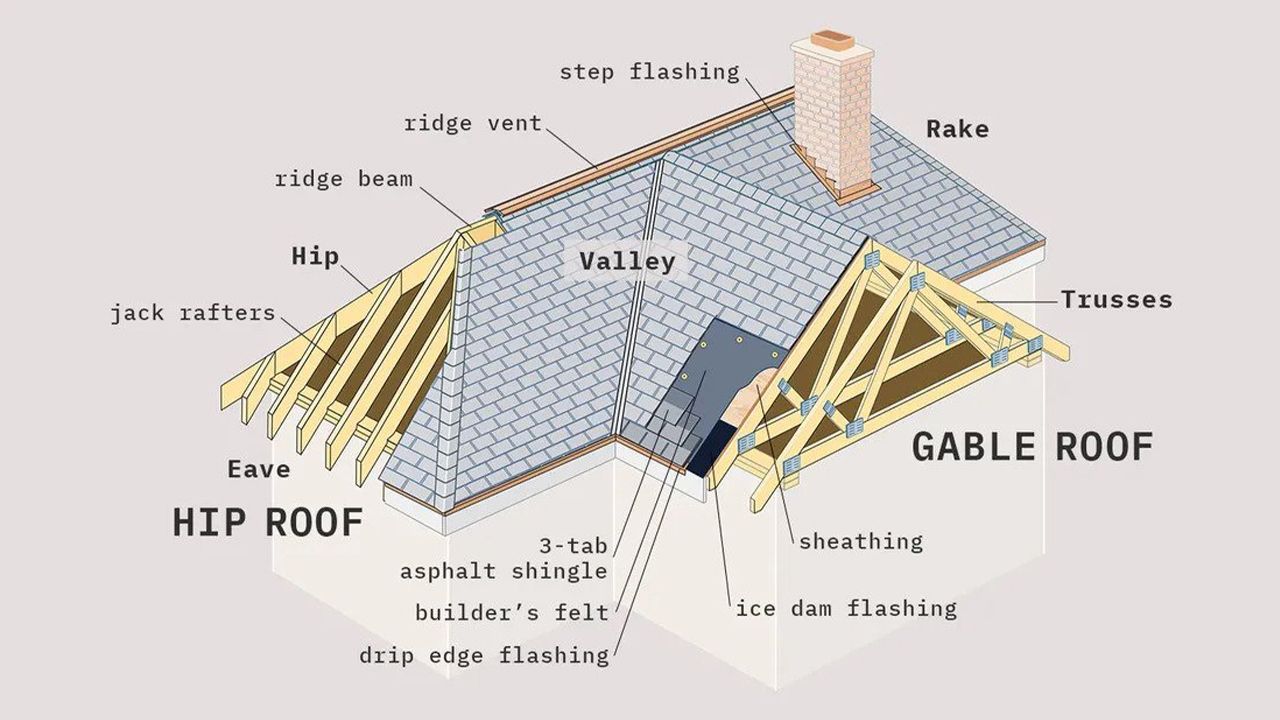 Rafters are cut on site from framing lumber such as 2x10s. Prefabricated trusses are webs of smaller, 2-by-4, members assembled in factories, delivered to the site and craned into place. Atop the rafters or trusses will be sheathing, usually of plywood or OSB, although older houses may have tongue and groove or narrow 1-by skip sheathing boards of sawn lumber.

Roofs rarely leak in the middle. The problem areas tend to be valleys, eaves, and where roofs meet walls, chimneys, or plumbing vents.

Special treatment in the form of flashing is required in these areas. Flashing is usually metal, ranging from zinc, copper or lead on the high end, to the far more common aluminum. It all can work well and last the lifetime of the roof—the key is proper installation.

One common issue is discoloration or moss growth. Discoloration is usually due to algae or mildew growth, and as with moss, the problem can be solved with the addition of zinc flashing and strips higher up the roof. As zinc gradually leaches out of the strips, it kills the organisms that are covering the roof. 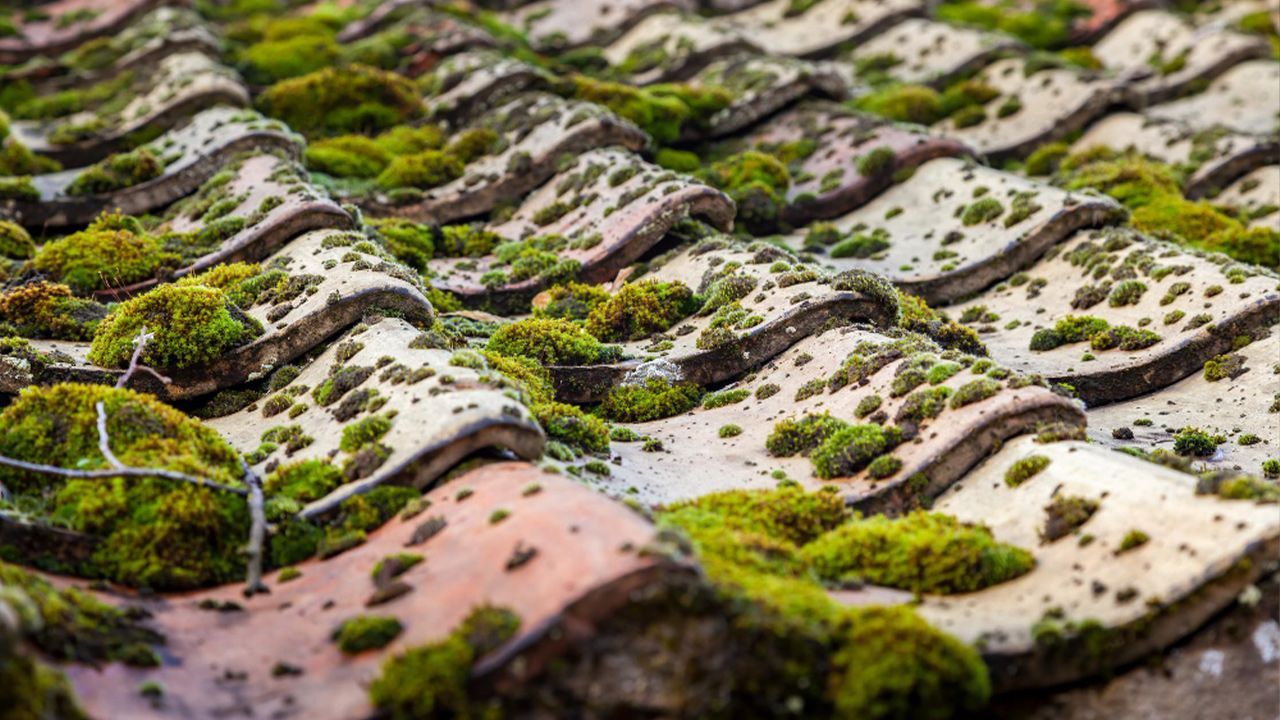 Shingles curling at the edges or losing their mineral surface are more serious. Both are signs that a roof is nearing the end of its life.

Steeper roofs can be covered with a variety of materials, with asphalt shingles being the most common and one of the easier DIY options. Even here you need to choose between three-tab shingles and architectural shingles. Three tab shingles are called that because each 3-foot long shingle is divided with slots into three-tabs.

A single panel of three shingles are nailed down at once for the simplest look of a slate roof configuration. Architectural asphalt shingles are built up and shaped to replicate the look of many different roof shingles like octagon scales or hand staved shakes. As a result, these dimensional shingles are often heavier and thicker.

Repairs and Projects to Consider

Having to tear off an old roof first can double the cost of even a basic asphalt shingle roof replacement. Code does allow for a second layer of shingles to be added to an existing shingled roof. However, it’s not the best approach, as leaving the old shingles on doesn’t let you check for and repair any damage to the roof sheathing

A leak doesn’t always mean you have to replace the whole roof. Most leaks happen at penetrations such as plumbing vents or skylights. In many cases, fixing the flashing at the penetration will take care of the leak.

In cold climates, leaks often happen along the eaves due to ice damming. When heat leaking into the attic melts snow on the roof, the meltwater can refreeze when it gets down to the colder overhangs, forming ice dams. If water from additional snow melt backs up behind an ice dam, it can work its way under the shingles and leak inside. Ice dams can require an immediate, temporary fix, followed by a longer term approach when conditions allow. 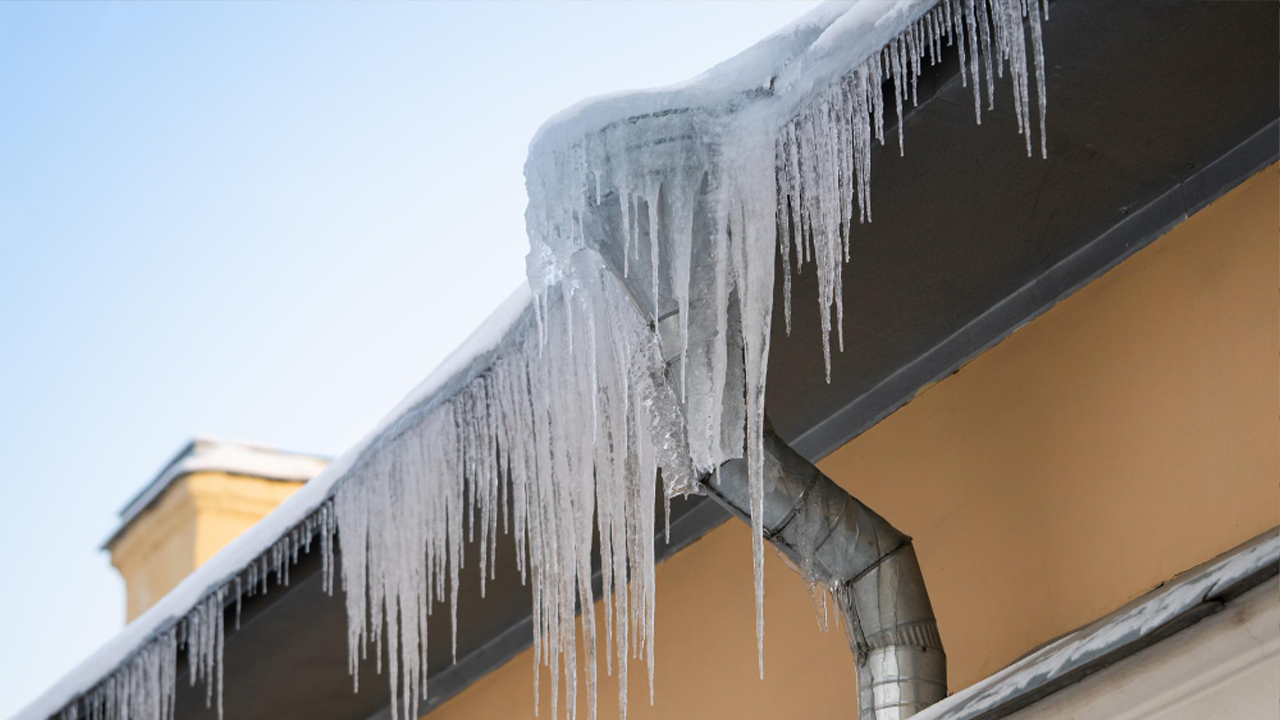 A newly shingled roof deck, in the colder regions of the county, may even require three-feet of a self-adhering, bituminous ice and water membrane flashing at the eves. Waterproofing this vulnerable part of the roof is always the best practice in preventing ice dam damage to the roof and home interior.

One example of when you definitely want to replace an existing older roof is before installing solar panels. Since solar panels have a lifespan of 20 to 30 years, you want to ensure the roofing below them will last as long.

I believe you have a certain understanding of the basic structure of the roof and the items that need to be considered for maintenance, the next article VistaRoofing will introduce you to the choices of roofing materials.

Send us a message 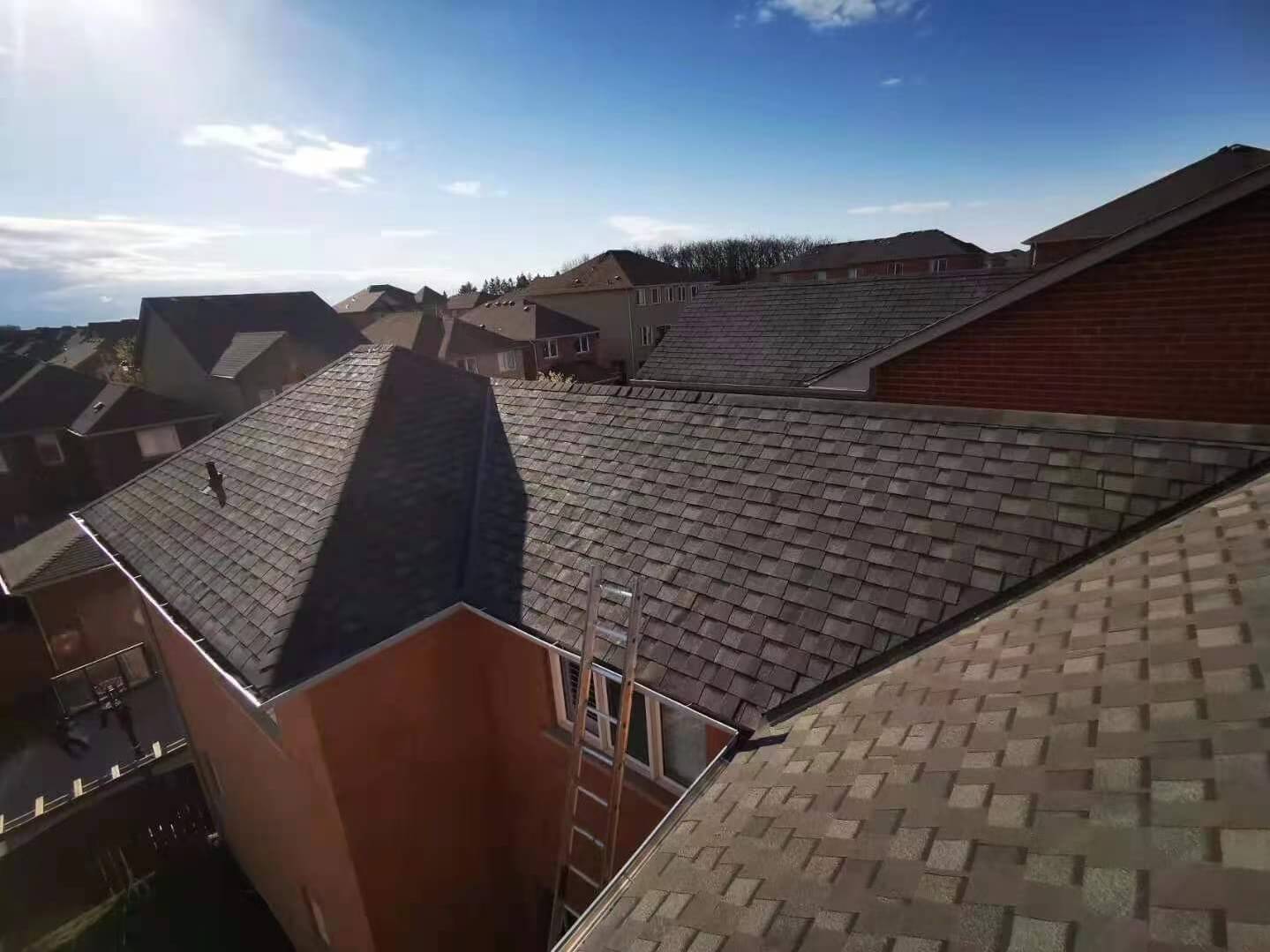 It should come to no surprise that popular home builds vary from country to country; especially when it comes to roofing, as it is highly weather dependent. 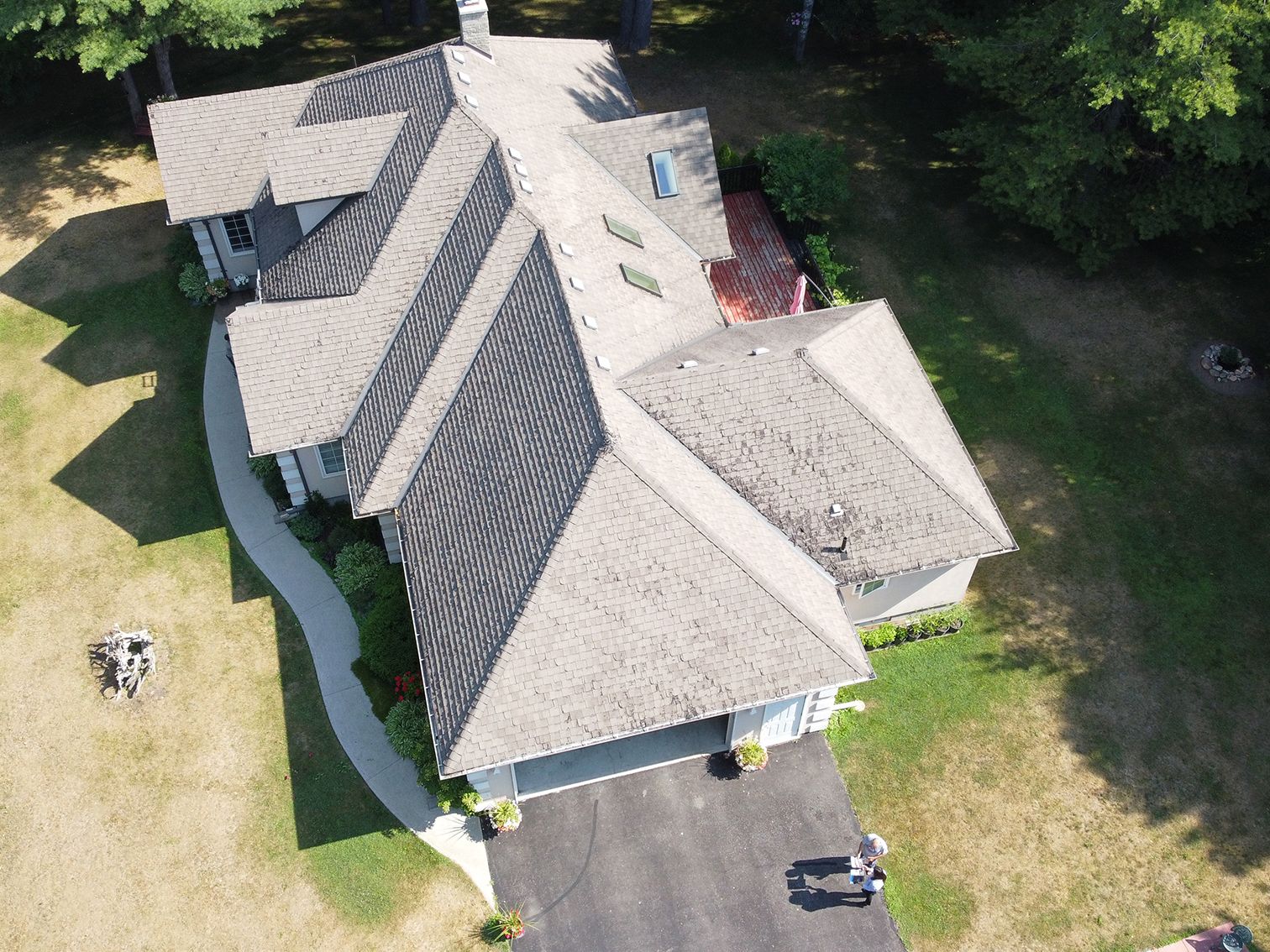 Clean the Gutters, Prevent a Disaster

In Canada, all homeowners living in a house (not a condo/apartment) need to have their gutters cleaned regularly, and if you don't know they need to be cleaned, a roofing company will certainly advise you to clean them regularly when you renovate your roof. 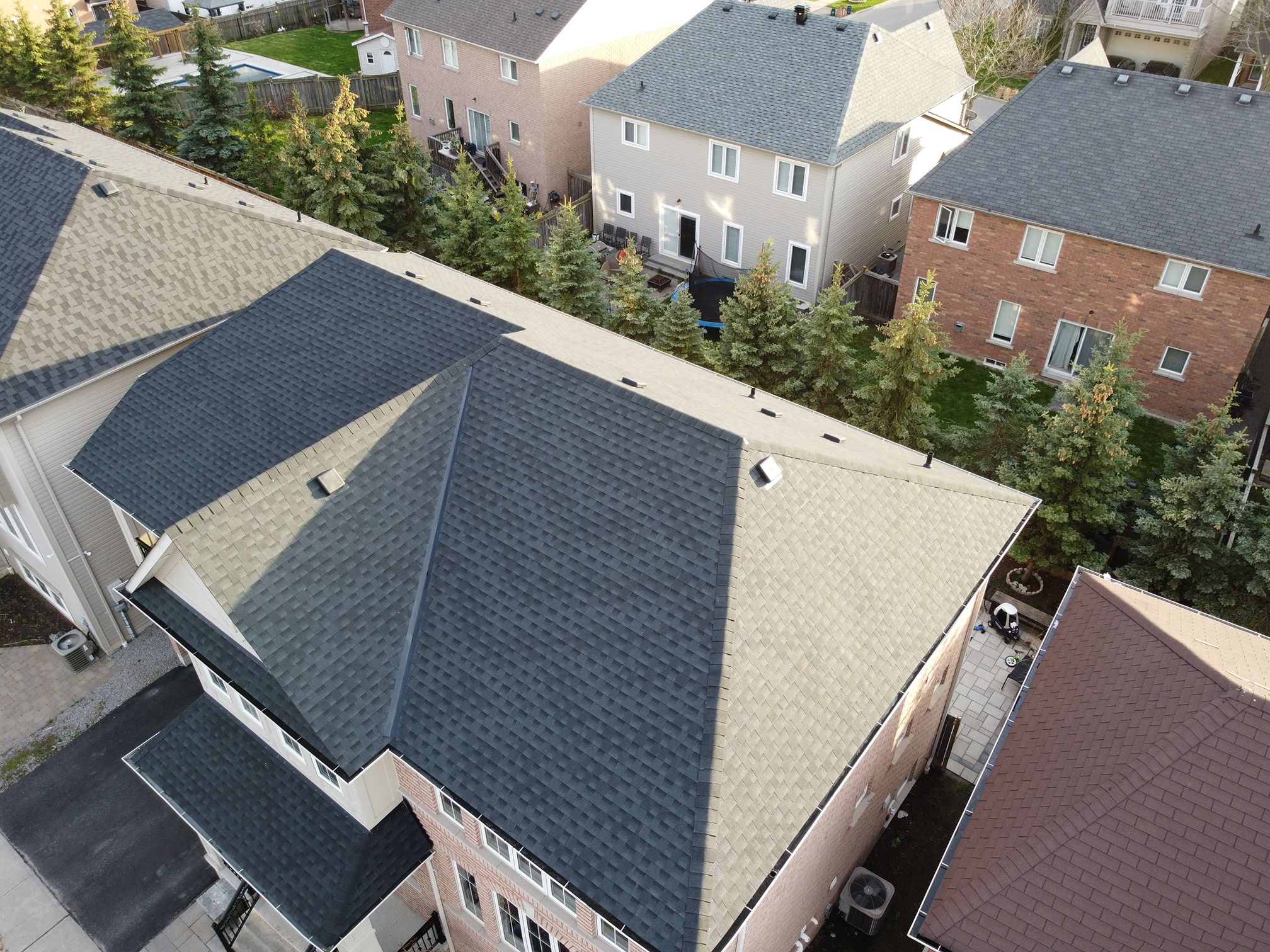 Roofing Designs and a Brief History

Nowadays, not a few crowds are looking for more customized homes to settle in. One of the things that can really make your house stand out among the others is the roof. 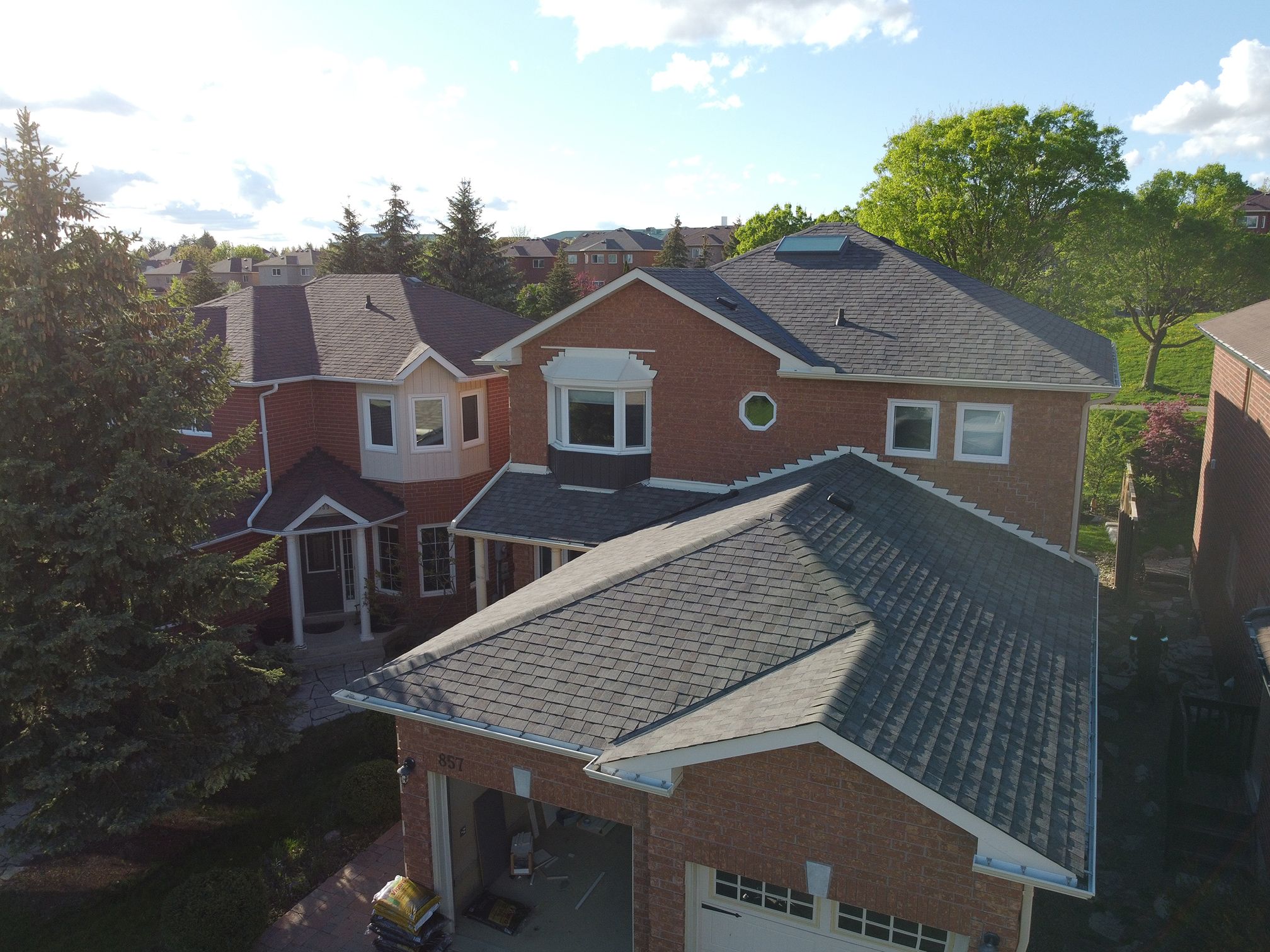 Part 2 of our introduction of the basics of roof systems to help you properly self-diagnose your roofing problems.